I’m now back in gloomy, grey, England after a beautiful few days in Portugal.

The flight into Gatwick yesterday was slightly unnerving, as we landed in high winds. There were gasps, followed by a few expletives from passengers as we made our descent, but thankfully, our pilot got us back safe and sound (and without the drama this plane had trying to land at Heathrow yesterday – https://www.bbc.co.uk/news/av/uk-47177383/plane-struggles-to-land-in-strong-winds-at-heathrow-airport).

Thursday was my last full day in Portugal. I had intended on having a rest day, but I also wanted to get back out to see what else was around, close to where I was staying.

I had been staying at the beautiful Alfagar II Aparthotel, which has private access to Praia Santa Eulália. Although I had taken a walk down to the beach on the day I arrived, I really didn’t explore that much. So, I decided to pack up my rucksack and head down to the beach armed with my book and my beach towel ready to explore Praia Santa Eulália.

Once I arrived at the beach, I noticed the tide was out, so I decided to keep walking and followed the beach around towards the next cove. The beaches around this part of The Algarve are stunning. They are rugged and wild, but magical and serene at the same time. The cliffs were something else, and their colours are just beautiful. 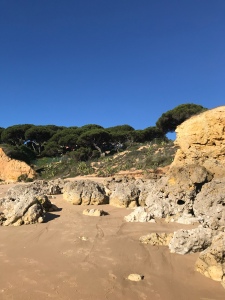 As I continued my walk around to the next beaches (Praia da Oura Leste and Praia da Oura), I turned back to look at the view. It was such a stunning spot. So it was there that I sat and read my book until lunchtime approached. 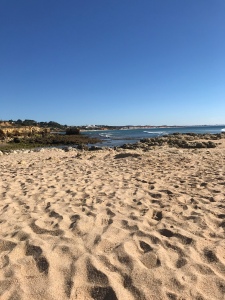 After a spot of lunch by beachside restaurant Vivaldo’s it was time to head back to the hotel to enjoy my last afternoon poolside.

As the evening set in, it was time to reflect back on a fantastic trip.

I booked the entire holiday (flights, hotel and transfers) through easyJet, and I couldn’t fault any of it.

The hotel was absolutely stunning and spotlessly clean, the staff were really friendly and helpful, the food at the Buganvilla Snack-Bar where I ate my evening meals was fantastic. The portions were huge, with a wide selection of starters, and main meals. The apple pie was to die for, and the chocolate mousse was simply divine! The evening entertainment was on the cheesy side, but I guess you expect that in resorts, and in actual fact, holidaying in February, I was probably lucky that evening entertainment was on the menu! The little supermarket in Alfagar Village was well stocked with everything you could wish for, including fresh bread, a butchers, and plenty of wine.

I didn’t use all the facilities on site (there is a car rental office on site – not sure I trust myself to drive on the ‘wrong side’ of the road yet!), but those I did use were superb. The gym, the spa, the pools, as with the rest of the hotel were spotlessly clean and well looked after.

On my first day, I had a slight problem with my lights not switching on in the apartment, however, I called down to reception, and within 15 minutes the maintenance guy was at my door, ready to fix it for me. 2 minutes later, I had light and had no further problems throughout my stay.

I had also booked my transfers through easyJet. Finding the meeting point at Faro airport was really straightforward, and only took 30 minutes to get from the airport to the hotel. On the return journey, thankfully I was early, and already in reception, because the transfer was a good 10 minutes early picking me up. We got to the airport early which at least meant I had a bit more time to look around duty free!

And despite landing in windy conditions, both flights were excellent.

All in all, a fantastic holiday!

Where to next I wonder?

(All photos in this blog are my own)